Preview Mode Links will not work in preview mode

The Busy Creator Podcast is a discussion program where creative professionals from across the spectrum share tools, techniques, and habits they use in their practice. Listeners are introduced to strategies and pro tips to be their most creative, productive selves.

Brittany Cormack is a costume designer for film and television. Following her training in fashion and dance, Brittany arrived in Los Angeles without a clue how to work in the movie business, but has since found her groove. She works primarily on independent films, commercials, and music videos, but every day is an adventure.

Work has taken her from frozen mountains to coastal swamps, and everywhere in between. In this conversation, we discover how movie sets work, what happens when everyone is freelance, and where to build habits even during crazy periods.

Catch up with Brittany on her IMDB page or Portfolio.

Subscribe to The Busy Creator Podcast on iTunes, on Google Play Music, on Android, on iHeart Bandwidth for The Busy Creator Podcast is provided by Freedcamp, Group Efforts Made Effortless.

Freedcamp is best free online project management software available. By using the built-in functions and additional tools like time tracking, invoices, milestones, file storage, and more, teams can customise the software for the task at hand! The Busy Creator Podcast itself is managed and operated on Freedcamp. Get started for free on Freedcamp.com

"Costume is the head-to-toe of a person" —Brittany Cormack

"Each set and each project has an energy of its own." —Brittany Cormack

"You have to be a little half-crazy to work in this industry." —Brittany Cormack

"If you’re ever looking for work, just plan a vacation." —freelancers’ adage

"In LA or New York, you can get anything if you have the money." —Brittany Cormack

"I only want to tell stories that I feel matter." —Brittany Cormack

"If you want to be a true collaborator, you’ve gotta be willing to be a team player." —Brittany Cormack

"If there’s a hat, you’re gonna wear it!" —Brittany Cormack

Visit BusyCreatorBook.com for your free trial Get Hollywood Stories: Short, Entertaining Anecdotes about the Stars and Legends of the Movies by Stephen Schochet as a free audiobook 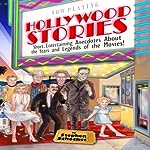 Conversations on creative culture, workflow, and productivity. The Busy Creator is for you, the creative professional working in arts, design, and media. You’ll hear direct from industry pros and learn the tools, techniques, and habits they’re using in their practice. We discuss strategies and pro tips you can use to be your most creative, productive self and excel in business. Past guests include designer and entrepreneur Armin Vit, design firm owner and professor Debbie Millman, Pentagram Partner Michael Bierut, author/speaker Todd Henry, and writer Jeff Goins, to name a few.